OpenTelemetry Collector is an executable that allows to receive telemetry data, optionally transform it and send the data further.

Data receiving, transformation and sending is done using Pipelines. The Collector can be configured to have one or more Pipelines. Each Pipeline includes a set of Receivers that receive the data, a series of optional Processors that get the data from receivers and transform it and a set of Exporters which get the data from the Processors and send it further outside the Collector. The same receiver can feed data to multiple Pipelines and multiple pipelines can feed data into the same Exporter.

Pipeline defines a path the data follows in the Collector starting from reception, then further processing or modification and finally exiting the Collector via exporters.

Pipelines can operate on 2 telemetry data types: traces and metrics. The data type is a property of the pipeline defined by its configuration. Receivers, exporters and processors used in a pipeline must support the particular data type otherwise ErrDataTypeIsNotSupported will be reported when the configuration is loaded. A pipeline can be depicted the following way:

There can be one or more receivers in a pipeline. Data from all receivers is pushed to the first processor, which performs a processing on it and then pushes it to the next processor (or it may drop the data, e.g. if it is a “sampling” processor) and so on until the last processor in the pipeline pushes the data to the exporters. Each exporter gets a copy of each data element. The last processor uses a FanOutConnector to fan out the data to multiple exporters.

The pipeline is constructed during Collector startup based on pipeline definition in the config file.

The above example defines a pipeline for “traces” type of telemetry data, with 3 receivers, 2 processors and 3 exporters.

When the Collector loads this config the result will look like this (part of processors and exporters are omitted from the diagram for brevity):

Important: when the same receiver is referenced in more than one pipeline the Collector will create only one receiver instance at runtime that will send the data to FanOutConnector which in turn will send the data to the first processor of each pipeline. The data propagation from receiver to FanOutConnector and then to processors is via synchronous function call. This means that if one processor blocks the call the other pipelines that are attached to this receiver will be blocked from receiving the same data and the receiver itself will stop processing and forwarding newly received data.

Exporters typically forward the data they get to a destination on a network (but they can also send it elsewhere, e.g “logging” exporter writes the telemetry data to a local file).

The configuration allows to have multiple exporters of the same type, even in the same pipeline. For example one can have 2 “opencensus” exporters defined each one sending to a different opencensus endpoint, e.g.:

Usually an exporter gets the data from one pipeline, however it is possible to configure multiple pipelines to send data to the same exporter, e.g.: 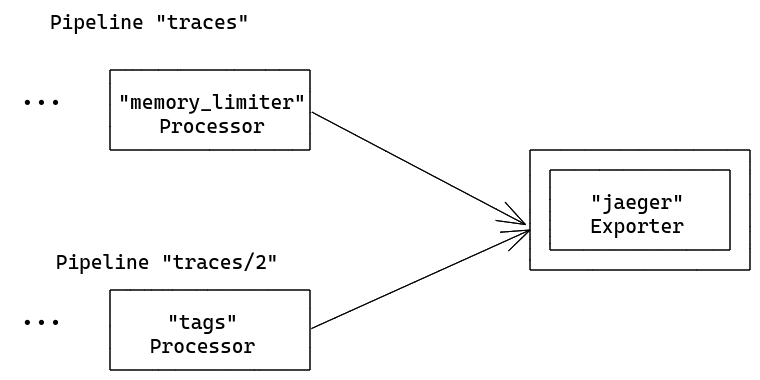 Processors can transform the data before forwarding it (i.e. add or remove attributes from spans), they can drop the data simply by deciding not to forward it (this is for example how “sampling” processor works), they can also generate new data (this is how for example how a “persistent-queue” processor can work after Collector restarts by reading previously saved data from a local file and forwarding it on the pipeline).

When the Collector loads this config the result will look like this:

Note that each “batch” processor is an independent instance, although both are configured the same way, i.e. each have a sendbatchsize of 10000.

To read more infromation about how you can run collector as Agent or Standalone collector please read the documentation here.